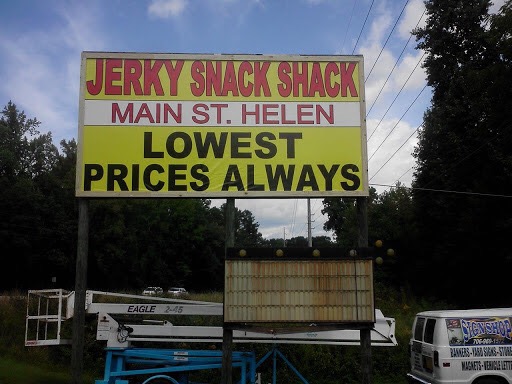 Jerky Snack Shack and all its products have become my newest obsession. Whether you want straightforward, exotic, or spicy jerky, they have got you covered. Plus, they have a line of hot sauces that’s impressive to say the least. I got to try two of them, Habanero Garlic Pepper and Peach Pepper’n Vidalla. While of them was on the lower end of Jerky Snack Shack’s heat scale, they still packed a wallop.

I couldn’t help but be impressed with the exotic jerky from Jerky Snack Shack. They sent me their alligator, python, and ostrich varieties. I thoroughly enjoyed all of them and am distraught at the idea of that being the end of my foray into their weird section. The best part about these unique jerky flavors is their flavor. Jerky Snack Shack does not want to lean on the interesting nature of the flavors they’ve chosen. They want their jerky to stand on its own regardless of its flavor.

I couldn’t help but notice that Jerky Snack Shack has a section of jerky they describe as the hottest on the planet. I was not able to try any of this jerky. I’m hoping I will have a chance to try a few of these flavors in the future. I’ve been craving a type of jerky that sets my mouth on fire. I have yet to come across such a jerky. Peppered jerky is different. That’s more of a spice. I’m talking about heat.

Speaking of setting your mouth ablaze, I have picked through the selection of hot sauces at Jerky Snack Shack. It’s beyond impressive. I’m a bit of a rube when it comes to hot sauce. I go with the normal kinds you find at the grocery store. Perhaps that approach is mistaken. Jerky Snack Shack has open my mind to more things than I can count. I would love to test my fate and add some of their 10+++ sauce to my food. Bring it on.

As far as Jerky Snack Shack’s jellies are concerned, I’m intrigued but not convinced. They combine flavors that seem like they do not go together. I am also a rube when it comes to jellies though. I have never been able to get my hands on the more unique blends. I have faith in the quality of these jellies; however, I would have to withhold my endorsement until I try them.

I’m more on board with Jerky Snack Shack’s licorice. They have produced licorice in flavors that match up with things I enjoy in other types of candy. Licorice seldom strikes my fancy. In a world where Twizzler reigns supreme, it’s understandable that complacency sits on a throne beside them. Twizzler is boring. The flavors that Jerky Snack Shack puts out there is anything but that.

When it’s done right, jerky is not just jerky. It has the potential to be so much more than that. Jerky Snack Shack does jerky and so many other things right. It definitely helps that the people that run this company are some of the nicest folks you will ever come across. You will get wonderful products with even better people backing them up.